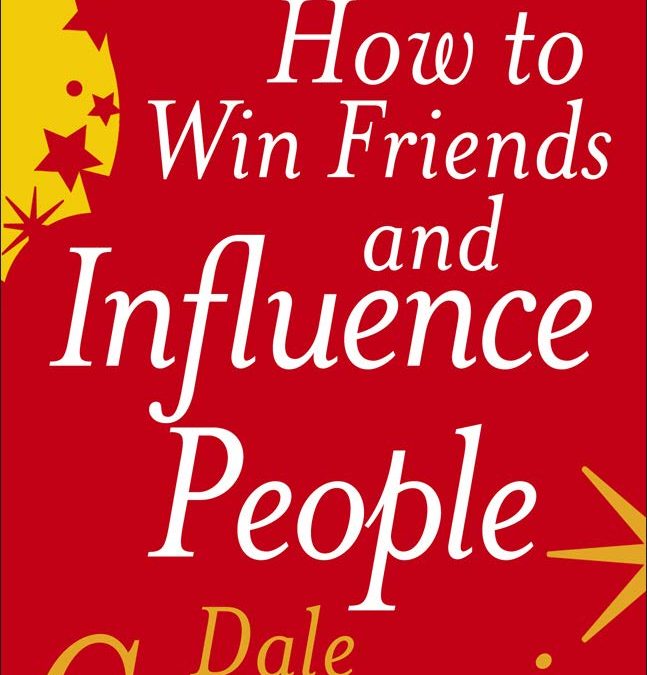 All the notes were taken directly from the source mentioned!

Humans are emotional beings, full of prejudice and motivated by pride vanity

Speak no ill, only the good

Do a honest effort to understand forgive

Develop the best person you can from someone else

P3 “Influence by talking about their wants”

Show them how to get it

Arouse in the other person an eager want

People rarely succeed unless they are having fun

There is nothing good or bad just perspective

Make the time and te effort necessary to concentrate and repeat and fix names indelibly in the mind. No excuses

P4: “Be the last person in the room to talk, be a good listener and encourage others to talk about themselves”

To be interesting, be interested! Ask questions that the other person will enjoy answering.

People will always be more interested in their wants and problems

P5: “Talk in terms of the other’s person interest”

Get to know the subject in which your guest is particularly interest.

Radiate happiness, and pass honest appreciation without trying to get anything in return. Priceless feeling

How to Win People to Your Way of Thinking

P1: “The only way to get the best of an argument is to avoid it”

There is no need to get the feeling of importance and display a supposed superiority by making someone else feeling inferior or hurting their pride.

They will eventually resent your triumph. You will never get your opponent’s good will.

9/10 an arguments ends with each person more firmly convinced than ever that he is absolutely right.

As hatred is not ended with hatred but with love, an argument only can be solve by tact, diplomacy, conciliation, and a sympathetic desire tot see the other’s person viewpoint.

In average we might be 50% of the times right, so don’t assume you are always right.

Again, by hurting some else feelings, you won’t alter their opinions.

No need of doing a look, intonation or gesture to show that other one is wrong. Why making it harder? Don’t handicap yourself

If you are going to prove anything, don’t let anyone know!

Start by: Well, now look. I thought otherwise but I may be wrong. I frequently am. And if I am wrong, I want to put right. Let’s examine the facts

You will never get into trouble by admitting that you might be wrong.

Judge other people by their own principles, not by your own.

P3: “if you are wrong accept it quickly and emphatically”

Any fool can try to defend or justify their mistakes. By fighting you won’t get what you expected, but by yielding you will get more than you expected.

P4 “Begin in a friendly way”

First convince the other person that you are his sincere friend, that’s the drop of honey that show that your will, is the great high road to his reason

Appreciation can change people’s mind faster than all the bluster and storming in the world.

P5 “Get the other person to say ‘yes, yes’ immediately

This sets the psychological process of the listener to move in the affirmative direction.

By having the other person saying no, the entire organism glandular nervous and muscular gather itself together into a condition of rejection by setting itself on guard against acceptance.

A yes response, opens the attitude and acceptance of the other person

Like Socrates, ask questions until you make your opponents found themselves embracing the conclusion they were denying without realizing it

Listen patiently and with an open mind. Be sincere, and encourage them to express their ideas fully

Remember they know more about their business and their problems than you.

Ask people to share their joys and only mention your achievements when they ask.

Don’t you have more faith in ideas that you discover for yourself than the ones that are handed it to you?

Make suggestions and let the other person think out the conclusions!

No one wants to feel they are being sold something, or told to do a thing

Lao tse, a Chinese sage, said be the river and keep yourself below the mountains, then you can reign from below…. Be behind all men, then they won’t feel your weight

Only wise, tolerant and exceptional people try to understand other’s in their ignorance, don’t condemn….

There is a reason why the other man thinks and acts as he does.

Try honestly to put yourself in his place. How would you feel or react in his shoes?

It’s all about the sympathetic grasp of the other’s person viewpoint. Make the other one feel his ideas and feelings are as important as yours

Start the conversation by saying what know he would like to hear, that will encourage the other person to have an open mind to your ideas

P9 “Be sympathetic with the other person’s ideas and desires”

Try: [I don’t blame you for how you feel, I would be feeling in the same way]

3/4 of all the people you meet are thirsting for sympathy. Give it to them and they will love you

P10 “Appeal to their noble motives”

When no information can be secure about the customer, the only sound basis on which to proceed is to assume that he or she is sincere, honest, truthful and willing and anxious to pay the charges, once convinced they are correct. Consider people honest, upright ad fair.

P12 “Throw down a Challenge”

Stimulate competition for the sake of the desire to excel.

Make people love the game, the process, the chance of self-expression and chance to prove his worth.

How to change people without giving offense or arousing resentment:

Make people know that you have confidence on them.

Don’t use the word BUT, use rather AND

P3 “Talk about your own mistakes before criticizing the other person”

Convince that someone has change the behavior

P5 “Let the other person save Face”

Don’t diminish a man in his own eyes, what does he thinks of himself? How can you understand his attitude based on his principles?

Don’t ignore the feelings of the other one, no need getting things done in our own way, finding fault, issuing treats or criticizing.

Don’t make the people feel disappointed and “let down” by you. Don’t destroy their dignity.

People crave for appreciation and recognition

It needs to come from the heart, if it’s not sincere it won’t work

Changing people is about showing them the hidden treasures they possess, show them that we all are half awake

P7 “Give a fine reputation to live up to”

Have a heart to heart talk to understand what’s happening

If you want to improve a person in a certain aspect, act as though that particular trait was already on his outstanding characteristics.

P8 “Use encouragement make the fault seem easy to correct”

Don’t discourage by emphasizing a mistake, praise whatever is right

Tell your child, spouse, student, employ that he is stupid or dumb at something, has no gift for it and everything is wrong and you will destroy any incentives to try to improve

Let the other person know you have faith in their ability, that is still undeveloped…